Skip to content
Hi Gang:
Today’s commentary is based upon an article I recently wrote for the CAPS (Californians for Population Stabilization website).  My CAPS article was, itself, prompted by a news release that was posted on April 27, 2012 by ICE (Immigration and Customs Enforcement).
I noted in my CAPS piece that the administration is doing everything possible to downplay the fact that ICE is supposed to be enforcing immigration laws!  Actually this should not surprise anyone- the President, Secretary of Homeland Security and other high ranking members of the current administration along with members of both houses of Congress have openly championed the concept of providing unknown millions, perhaps tens of millions of illegal aliens with pathways to United States citizenship!
In the ICE press release that heralded the assistance provided to crime victims, the victims who were assisted were illegal aliens who were being held captive by pernicious human traffickers.  In all likelihood, the smugglers themselves were illegal aliens and this raises a point I have made innumerable times in a variety of venues including when I have appeared at Congressional hearings- the most likely victims of ethnic organized crime groups are members of the immigrant communities.  This is why it is counterintuitive and indeed antithetical to law enforcement goals to not enforce immigration laws in order to curry votes within the Latino community!
Failures to enforce our immigration laws and secure our nation’s borders facilitate the crimes committed by transnational gangs and smuggling organizations.  Furthermore, it is unbelievable that Janet Napolitano insists that our borders, especially our southern border, is now secure while the Department of Justice touts its successes in aiding aliens who had been victimized by the smugglers who facilitated their illegal entry into our country!
What was also not noted in the article is how, all too often, aliens who declare themselves to be victims of crime can then seek to obtain visas that would enable them to reside in the United States- because they were victimized by the smugglers who conspired with them to evade the inspections process and the United States Border Patrol whose mission is to prevent the entry of aliens into our country whose presence would be problematic for our country and our citizens.
Title 8, United States Code, Section 212, is contained within the Immigration and Nationality Act, and enumerates the various categories of aliens who are statutorily ineligible to enter the United States, will provide a clear prospective as to the intention and extreme importance of our nation’s immigration laws. Among the categories of aliens who are supposed to be kept out of the United States are aliens with dangerous communicable diseases, aliens who suffer serious mental illness and are prone to violence, aliens who are convicted felons, aliens who fugitives from justice in other countries, aliens who are human traffickers and drug smugglers, aliens who are war criminals and aliens who have committed human rights violations. Also aliens who are engaged in terrorism and espionage are among those who are, by law, supposed to be prevented from entering our country.
It must therefore be presumed that aliens who seek to evade the inspections process that is mandated by our laws to protect our citizens and our country from aliens described in the section of law I noted above are members of one or more classes of excludible aliens.  Furthermore, records of entry are not created when aliens are not inspected when the enter the United States, creating additional national security vulnerabilities.
Finally, it is worth noting that while the press release touted the success scored in aiding illegal aliens who were victimized by smugglers- certainly an important mission, it is extremely rare for the administration and advocates for open borders to note the huge number of Americans who fall victim to criminal   and aliens and those aliens who are associated with terrorist organizations.
What seems to be missing from most discussions about illegal immigration is the simple and fundamental fact that the purpose of our nation’s immigration laws is to protect American lives and protect American jobs!
Currently the entire immigration system lacks integrity and the many failures of the federal government to instill meaningful integrity into the enforcement an administration of our immigration laws creates a serious threat to national security.

-michael cutler-
Please check out my website at AND Magazine:
www.TalkBorder.com
Please also check also out my pesonal website:

On Friday evenings from 7:00 PM until 8:00 PM Eastern Time, I host my show, “The Michael Cutler Hour” on the USA Talk Radio Network on Blog Talk Radio.
I hope you will be listening!  (Please tell your friends and neighbors!)
Here is a link to the program:

According to an  ICE news release
issued in Phoenix, Arizona on April 27, 2012, personnel of HSI
(Homeland Security Investigations, a division of ICE) were lauded by the
Department of Justice for their dedicated work to assist crime victims
in the Phoenix, Arizona area.

The fact that a federal agency has created a sub-agency within the
ranks of its personnel to apparently do whatever is possible to minimize
the use of the word “Immigration” where law enforcement at ICE is
concerned, is an unusual situation all by itself!  The FBI (Federal
Bureau of Investigation) has a variety of mission including Foreign
Counterintelligence (Spy hunters) to agents who are focused on a wide
array of criminal investigations including civil rights investigations,
fugitive investigations, terrorism investigations, etc.  Yet all of the
special agents of the FBI carry the same badges and credentials- they
are simply identified as being members of the FBI.  There are other
federal law enforcement agencies that similarly pursue a wide variety of
investigations and yet, they also identify themselves simply as being
members of the DEA (Drug Enforcement Administration), BATF (Bureau of
Alcohol, Tobacco and Firearms or Secret Service.

Yet at ICE, a number of agents actually carry different badges and
credentials and wear raid jackets that identify them as being members of
HSI! 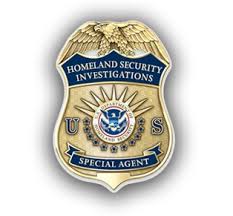 Here is the Immigration and Customs Enforcement badge: This lunacy is costing our government quite a bit of money and
appears to be all about re-branding the agency that has lead authority
and responsibility to enforce our nation’s immigration laws from within
the interior of the United States- a goal that clearly does not show up
on the radar scope of the current administration other than to attempt
to create an illusion of enforcement.

Now, the Secretary of Homeland Security, Janet Napolitano has
repeatedly stated that the borders are secure and that there is no
“Spillover Violence” in the United States from Mexico.  However, the
following quote that was issued by the folks at ICE who, incidentally,
operate under the direction and purported leadership of Ms. Napolitano
gives a different story:

“The United States Attorney’s Office is deeply
committed to seeking justice on behalf of crime victims and their
families,” said Ann Birmingham Scheel, acting U.S. attorney for the
District of Arizona. “Our prosecutors and advocates work diligently with
our law enforcement partners to ensure that crime victims and their
families obtain the services and assistance they need to help them get
through difficult and challenging times in their lives.”

Cardenas, a special agent assigned to HSI Tucson, was lauded for
her work as an HSI victim assistance coordinator, a position she has
held since December 2009. In the course of her work, Cardenas has
responded numerous times to human smuggling drop houses, hospitals and
other locations to work with victims of violent crimes such as assault,
sexual assault and hostage taking. Cardenas was noted in particular for
her work providing assistance to unaccompanied children found in drop
houses or rescued from human smugglers who were holding them for ransom.
In these cases, she worked closely with agencies such as Arizona Child
Protective Services, U.S. Department of Health and Human Services and
the Mexican consulate to help reunite these children with their parents.

On February 23, 2012 Fox News Latino posted an op-ed I wrote that was entitled, Michael W. Cutler: Border Spillover Violence is a National Reality

Meanwhile, when the political leaders of the state of Arizona
attempted to fill the vast void created by the myriad failures of the
federal government to secure our nation’s borders and enforce the
immigration laws that at their foundation are intended to save American
lives and jobs by enacting its own immigration law, SB 1070, the federal
government acted swiftly- to sue the state in an effort to block the
implementation of that law!

Simply stated, the Obama administration cannot have it both ways!